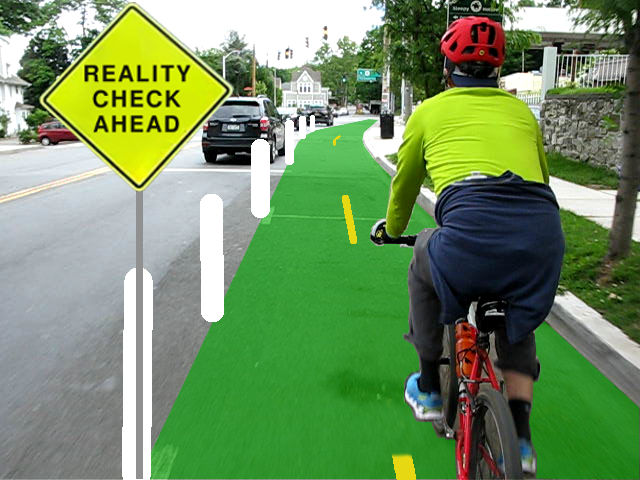 We wrote an op-ed for the River Journal on how local public policies force people to drive, and some steps to change it.

The publisher gave Mayor Wray of Sleepy Hollow and Mayor Fixell of Tarrytown the opportunity to write a response. Beside missing the broader policy concerns we raised, their piece is full of holes.

Below, we quote the Mayors' key misstatements and misunderstandings, then lay out the truth of the matter.

There just is no way to deny that Tarrytown and Sleepy Hollow have parking shortages in our respective downtowns.

Sure, it can be hard to find a parking spot right in front of the store you're going to. That's because most stores are so small there's only one spot there.

Overall, though, actually counting parking spaces and how they're used proves there's plenty of capacity.

Around downtown Tarrytown there are over 740 spaces in parking lots. Plus there are 136 parking spaces on Broadway alone. Half of those spots are empty during peak shopping times. And south of Elizabeth St, the spots on the east side of Broadway are vacant most of the time.

In Sleepy Hollow, the two parking counts, above, found 0 (that's right zero) people parked on the east side of Broadway. Then the parking disruptions caused by gas main construction on Broadway proved that alternative parking locations exist.

Both villages have a parking management problem. Solutions include better pricing and signage strategies.

The problem is exacerbated when the weather turns cold and/or wet and is that much worse for those people who are not highly mobile, such as some of our seniors. 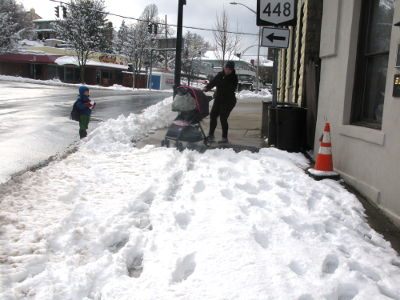 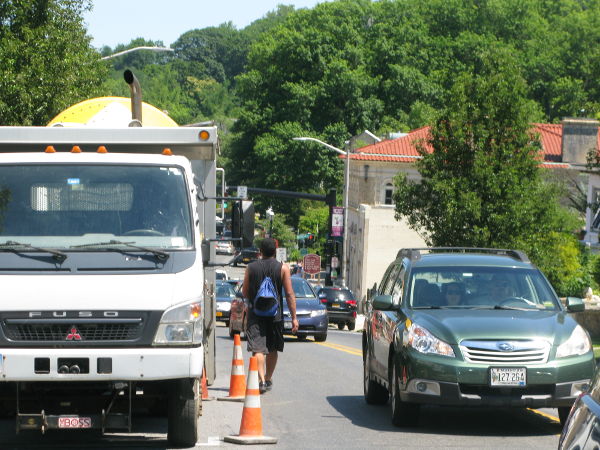 Person forced to walk in traffic on Broadway due to sidewalk construction near Main St in Tarrytown. The Village proactively refused to ensure the required safe accommodations were provided.

Dudes, drop the concern trolling. If the mobility of seniors was a genuine goal of the Mayors, we'd see sidewalks: on every street, with ADA curb ramps at each corner, without cars parked on them, with ADA accessible bypasses during construction, and that have snow removed from them by the villages.

The Mayors seem to be unaware of what happens in places that really support active transportation. People of all ages are out walking and cycling in all sorts of weather.

Let alone that for every person we get walking and biking, there's one more parking space available for folks who can't walk or bike.

Our downtown businesses rely in no small measure on customers and clients who do not live within reasonable walking distance of their destinations and homes.

A significant percent of patrons in our villages walk. This is particularly true for Sleepy Hollow, which has a dense downtown population.

And our residents who live a little further away are the reason we need to make cycling safe.

By the way, people who shop on foot and by bike spend more money downtown over time. 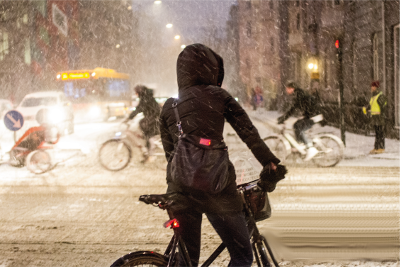 Several people cycling on a snowy evening in Copenhagen

Much of their business occurs on days and nights when bad weather discourages all but the few hardiest souls from walking or biking.

What?! Big business during bad weather?

Most days here are nice. We have some days of rain or snow, and those are days where people of all stripes reduce their shopping.

Mass transit options in Westchester are too limited to offer much relief.

That can be solved by having the Route 13 bus come every 15 minutes.

Folks who say "that's too expensive" need to realize Tarrytown spent $650,000 to build a 25 space parking lot on the west side of Washington St. Then add in all the parking lots built along the bus' route through Ossining, Sleepy Hollow, Tarrytown, Greenburg, Elmsford, White Plains and Port Chester. Good bus service turns out to be pretty cheap.

In both villages, but especially in Sleepy Hollow, residential parking is at a premium.

That's what happens when things are given away for free.

Instead of worrying about storage for cars, our Mayors need to get out from behind their steering wheels, load up on some empathy, and start caring for people:

Parallel parking on both sides of the street is a necessary component welcoming, successful, and pedestrian-friendly/safer downtowns. 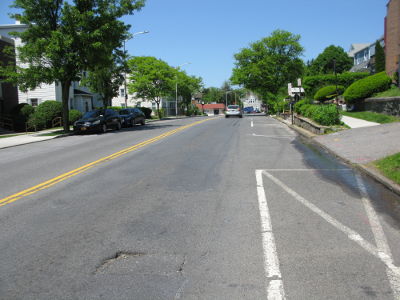 The sidewalk by the Korean Church (right) in Sleepy Hollow is elevated, away from cars on Broadway. Note the vast majority of parking spaces are empty.

This doesn't apply to the bike lane proposal in Sleepy Hollow. Where there's parking on the east side of Broadway, the sidewalk doesn't exist or is set back from the street.

Mr Speck is a walking advocate who's gradually coming around to understanding cycling.

In rare instances, it makes sense to eliminate a flank of parking for a bike lane or transit lane.

The next paragraph goes on to say "Most often, though, the proper solution is to create the space for bike and transit lanes by removing not parking lanes, but extra driving lanes." (page 151)

Our cherry picking objection aside, Broadway actually has the conditions that make it one of those "rare instances." We have residential and commercial density, 4 schools on Broadway and 1 nearby, alternative parking locations available, and the Tappan Zee Bridge bike path opening soon.

That quote is rich. Giving commuters precedence is exactly what Tarrytown does — as long as they're in cars. The Village government sacrifices the peace and safety of its own residents (particularly in the in Miller Park neighborhood) for commuters driving to the train station.

As close monitors of our respective planning efforts know, we have been and are actively pursuing ways to enhance the walkability and bikeability of our villages.

If that were the case, the recent Comprehensive Plans for both villages would contain significant, concrete goals for completing our sidewalk networks, establishing a safe cycling network, and increasing service on the Route 13 bus.

Vague statements calling for sidewalks within 1/4 mile of schools and parks, plus a couple short trails for recreational users doesn't cut it.