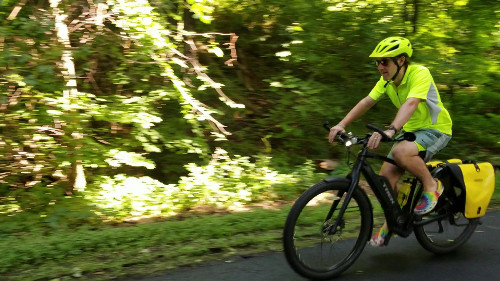 This video highlights an amazing commute made possible by an e-bike. The new law has made his commute illegal. 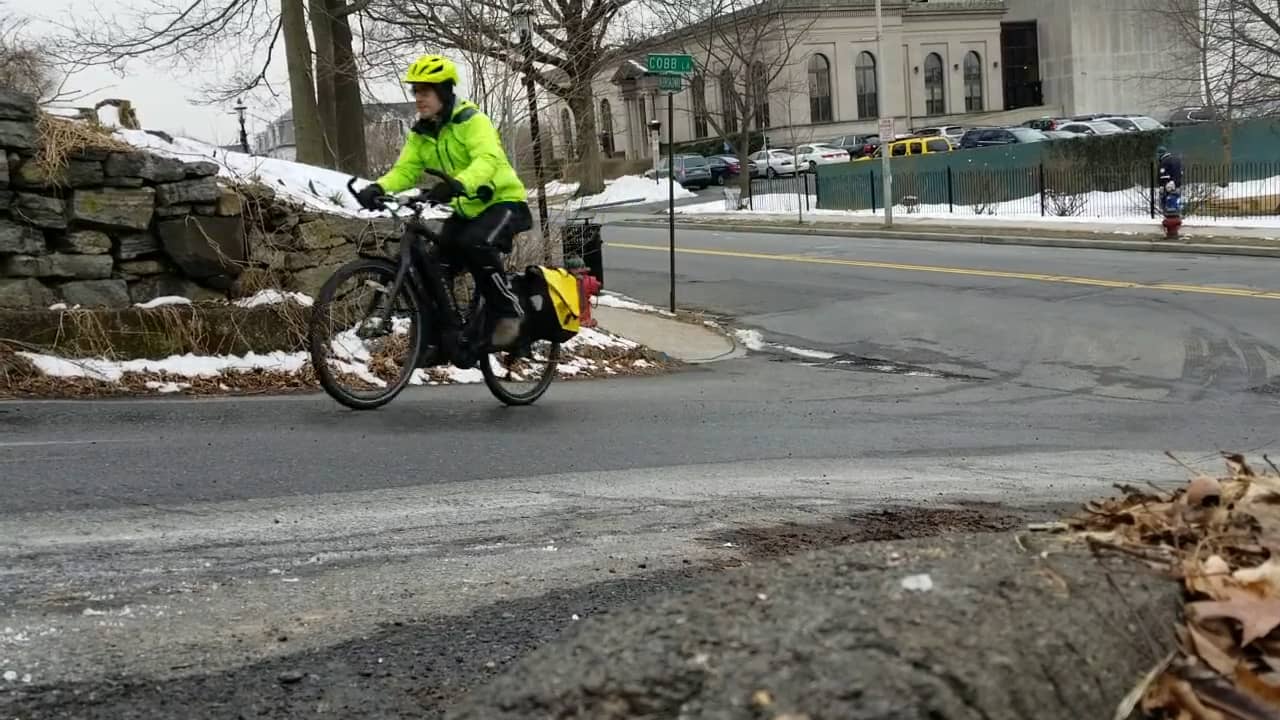 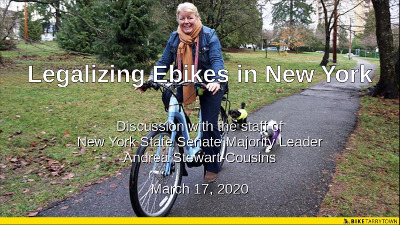 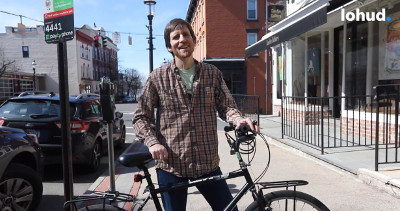 The owner of Sleek E-Bikes and our Director were interviewed by the Journal News. The article is behind a paywall, so we excerpted the parts of the video about speed limits and muncipal regulation.

"Legalizing" ebikes in New York State is part of Governor Cuomo's proposed budget, released on January 21st. Unfortunately, the bill1 has so many gotchas, it makes ebiking illegal outside of New York City. Worse, it sets up whole new ways to criminalize communities.

The bill was signed by the Governor on April 3, 2020. The ebike part is effective immediately.

It includes a few changes from the initial bill. See these boxes in each section, below, for details. 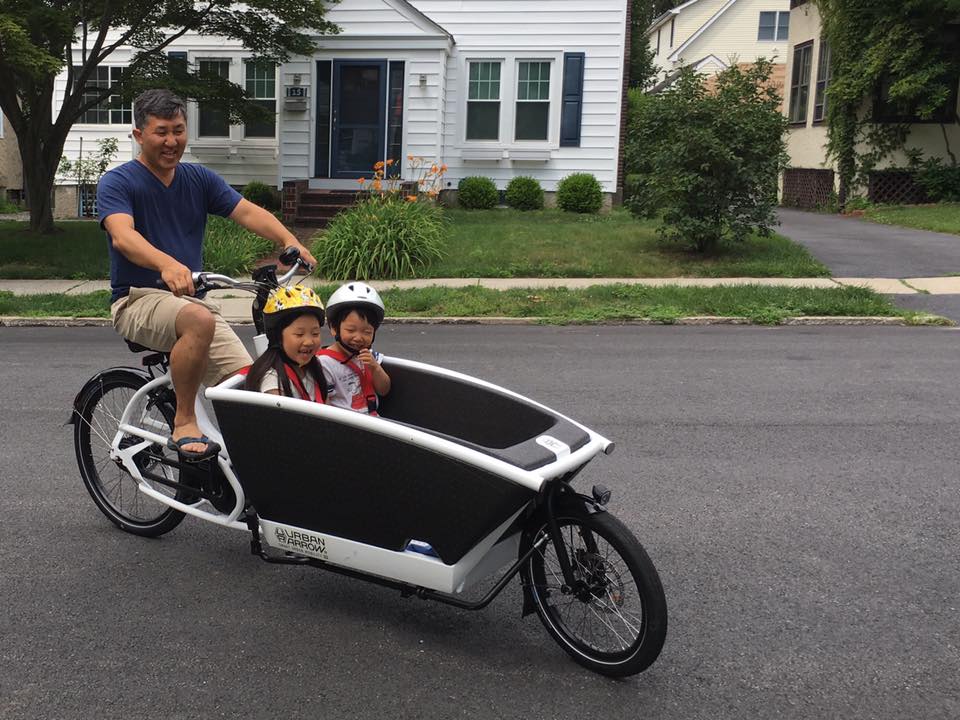 Why This Matters To You

Even if you don't have an ebike now, properly legalizing ebikes will significantly benefit you in the long run.

Ebikes get people out of cars. This is a huge win for traffic congestion, safety, health, family budgets, government budgets, economic development and addressing the climate emergency.

And once ebikes are legal, you might even join the fun!

Regular bicycles and Class 1 ebikes2 are very similar in how they're used, how they look and the tiny risks they pose. The main difference is electric assist bikes help non-athletic people conquer hills (video) and long distances (video).

But the Governor's language will needlessly confuse riders and police by creating a series of different expectations for people using ebikes:

Banned from Most Roads

People wouldn't be allowed ebike on streets with speed limits over 30 MPH. That's 90% of roads run by the State DOT or counties -- the roads that get people to other places.3

The default ban is still there, but local governments would be able to authorize ebikes on roads with speed limits over 30 MPH. 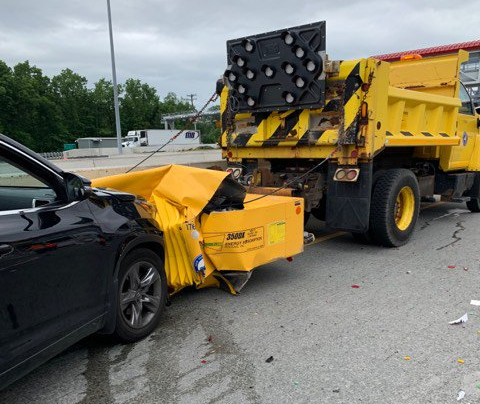 People crash cars into the back of construction trucks on a regular basis. Visibility isn't the problem.

Each municipality and county would be allowed to make their own rules for how, when and where electric bikes can be operated. That includes the possibility of requiring helmets and reflective clothing.

So for every trip you want to make, you'd have to look up the laws for each village, town and county on your route.

Regulation at the county level has been removed. Local governments in Westchester, Nassau and Suffolk counties would need County approval to regulate maximum speed, clothing and helmets.

Folks couldn't operate a Class 1 or Class 2 ebike4 over 20 MPH. Going down hills would require riding the brakes.

People would have to go single file when riding ebikes, while people on manual bikes and people in cars are allowed to be side by side.

Can't use ebikes on sidewalks anywhere. Municipalities are blocked from allowing it locally.

There are places where the road is very dangerous and the sidewalk has few people walking on it. In cases like this, cycling on the sidewalk needs to remain an option.

Local governments would now be able to allow ebikes on sidewalks if so desired.

The new draft adds language about parking electric bikes on sidewalks. It says local governments shall create a means to identify if parked ebikes belong to a person or are being operated commercially.

Ebike riders would have to be at least 16 years old. This limits mobility options for families in hilly towns.

There are smaller, less powerful ebikes available for kids who need them.

The bill says electric bikes "may only be operated on public highways..., private roads open to motor vehicle traffic, and designated bicycle or in-line skate lanes."

Since multi-use paths don't explicitly fit under any of those categories, would people still be able to commute to work on an ebike via the North County Trailway in Westchester County?

Trail access for people riding ebikes seems to be banned. Governments can create laws/regulations allowing such use.

The alcohol and drug provisions are overly strict. They're quite convoluted, too, with two different sets of penalty tiers.

In the event of a crash, ebike riders face a wide range of penalties. The low end starts at a $300 fine and/or 15 days in jail. Repeat offenders (over a 10 year span) with over 0.08% Blood Alcohol Content (or even over 0.05% under certain conditions) could be convicted of a Class D felony, with a fine reaching $10,000 and up to 7 years in prison.

The text specifies electric bicycles as having two wheels. Thus it doesn't legalize the use of electric tricycles or quadcycles. Such vehicles are important for disabled people, families and deliveries.

Some good news. The new version of the bill removes mentions of wheel quantity. It adds a requirement that ebikes be no more than 36 inches wide.

A provision for labeling the class, speed and power of ebikes was added. This comes from the standalone bill that went through the Legislature last year.

So now delivery workers will get harassed about this.

No Class 3 Outside NYC

The only place Class 3 ebikes5 could be used is New York City.

The industry standard speed limit for Class 3 ebikes is 28 MPH. New York would require the creation of special bikes with a 25 MPH cap.

The current bill is a good step forward for ebike users in New York City. Legalizing Class 3 ebikes there would alleviate the discriminatory enforcement that plagues delivery workers.

Around the rest of the state, though, the provisions are problematic. Right now, Class 1 ebikes are in a legal grey area. The bill would make it clearly illegal to use ebikes under normal cycling conditions.

The urgency for ebike legislation is to stop harassment of delivery workers in NYC. While this bill does that on it's face, it adds new regulations that makes existing ebikes and riders back into scofflaws in new ways.

There is discussion of creating a bill to remove the problematic provisions.

Until that passes, advocates in each community need to get active. We have to lobby and watch each local and county government to: