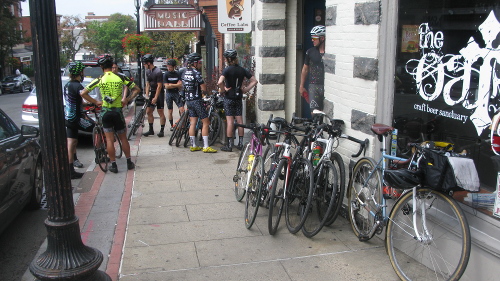 Put them in cars? They'd overwhelm the parking spots on the west side of Broadway from Main to Elizabeth.

On nice Sundays, 5,000 people bike up Route 9W. Once the Tappan Zee's bike path opens (est. mid-2019), they're going to start coming here. We'll see groups like this all day long on Saturdays and Sundays.

Bike Tarrytown plans to promote our villages to the region's recreational riders. Your business can be mentioned in those campaigns. 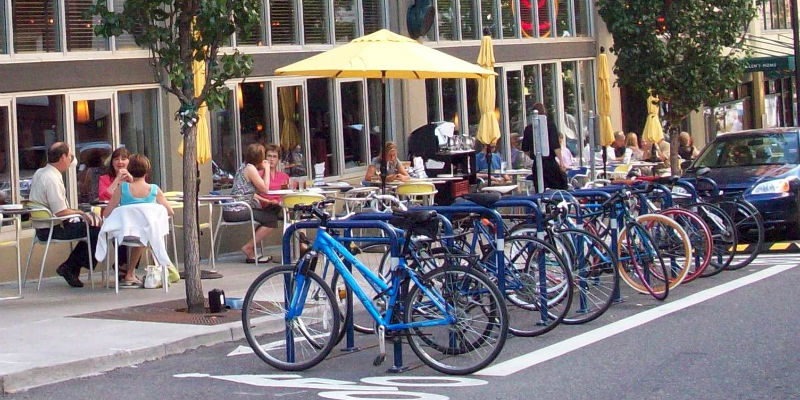 That's 10 customers in the space one car parking spot.

The restaurant looks like it's doing pretty well, right?

How's business in your establishment on weekend mornings and afternoons? If we play our cards right, you'd better staff up! 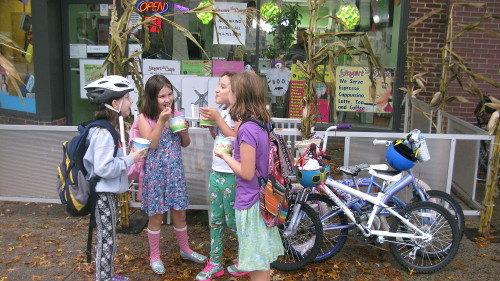 A protected bike lane on Broadway would mean students could bike to and from our 4 schools along it. They'd be able to stop by the 7-Eleven, Yogurt Le Crepe, etc on their journeys.

Alas, they're currently stuck on buses or being driven because Broadway is too dangerous.

And speaking of schools, the bike lane would make it easy, fast and fun for teachers to swing into town for lunch. 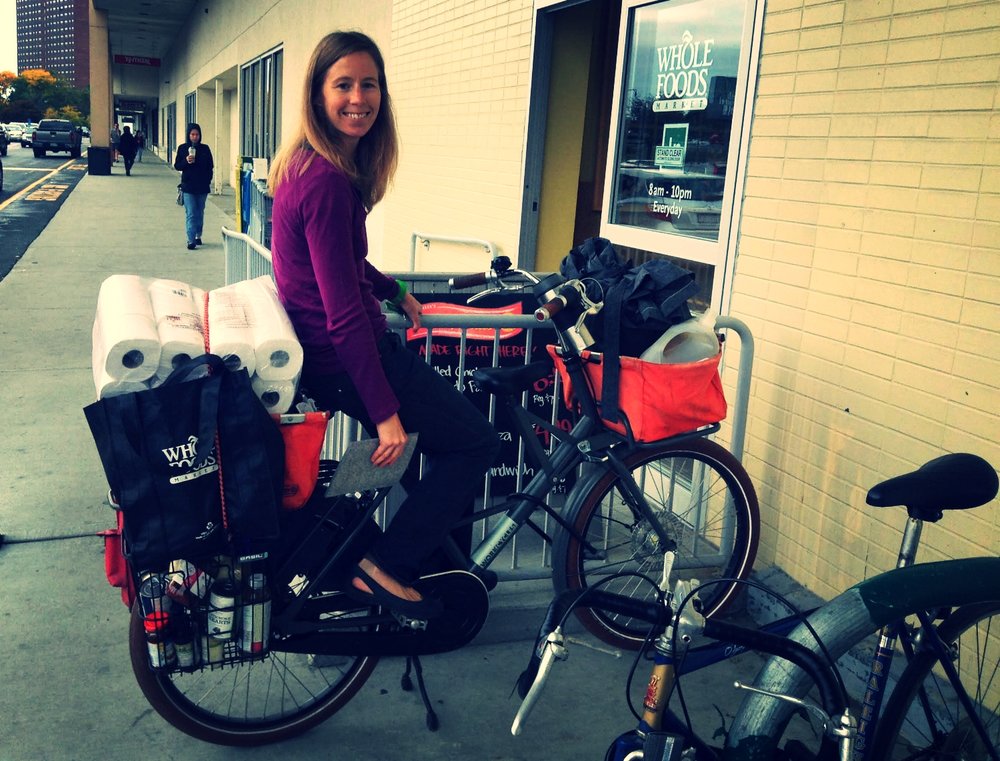 While purchases on each trip are generally less, popping in is easy, so people cycling come more frequently.

Bikes are capable of carrying more than you might think. Plus, as bike culture takes hold, people will start using cargo bikes.

And, of course, it's easy for people to browse for big items by bike and then either come back with a car later or have the item delivered. 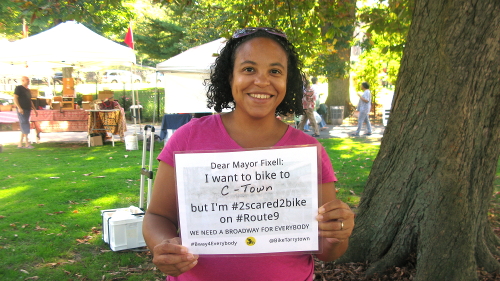 The 20,000 residents of Tarrytown and Sleepy Hollow live within 2 miles of our downtowns. Hopping on a bike is frequently faster than driving when you factor in traffic and parking.

But most people don't do that now because they're terrified by the cars and trucks on Route 9. So they drive, clogging the roads and parking spaces.

Roads are shared public spaces. Right now all of Broadway is given to people who drive. We can provide everyone real choices in how to travel by building a two-way protected bicycle lane on Broadway.

The trick is where to put it. Fortunately, parking lots along the Broadway corridor have more than 700 spots, of which over 300 parking spaces aren't being used in peak times.

Tarrytown has long needed to take a comprehensive look at parking. Private lot owners can get money by having (some) meters. A "parking guidance system" can help people find spots quickly. Pricing curb-side parking according to how precious it is will ensure spots are available.

That would free up the 42 spaces on the east side of Broadway between Elizabeth and Patriots Park for a safe place where people can ride. 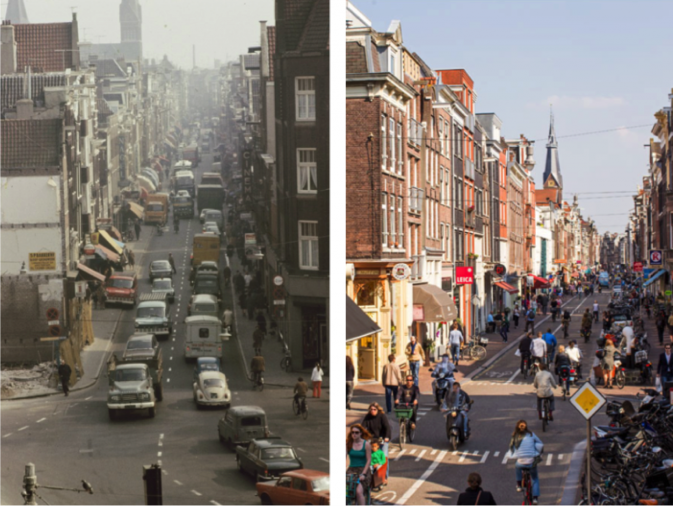 Uh... Amsterdam wasn't always Amsterdam. Check out that shot from 1971. Looks kind of like our Broadway. That street then (and ours now) being stuffed with cars was the result of public policy.

Since then, Amsterdam changed their policies. They invested in real bike infrastructure. Those decisions created a beautiful, vibrant city, which you can see in the 2013 picture. This video explains it well: https://youtu.be/XuBdf9jYj7o

Yes, we have bigger hills than Amsterdam. Fortunately, electric assisted bikes can help people over that hurdle. And Tarrytown's new e-bike store, Sleek eBikes, puts us ahead of the game. 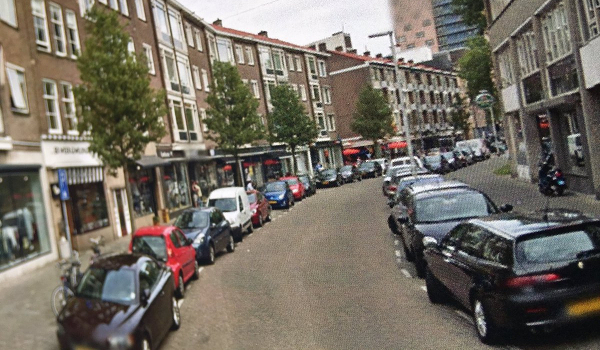 Before: Loads of parking! 22 cars!

But would you want to hang out there? 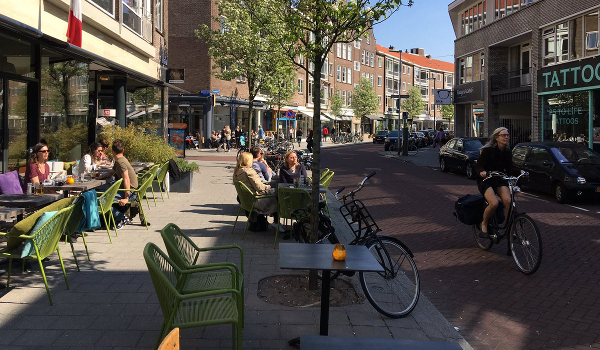 After: 9 cars and dozens of parked bikes. (They're there. Look in the background.)

Here's a place to spend some time, and money.

Merchants Want a Broadway for Everybody

(If you want to print this page, here's a PDF version of it.)