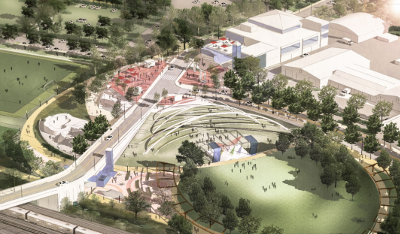 Rendering of the East Parcel. By WSP, via FEIS.

The East Parcel shows the tremendous vision we have for making Sleepy Hollow a better place. With a smidgen more foresight, we can make small changes to the East Parcel proposal that will significantly bolster cycling.

The East Parcel is within easy reach of the Manors, downtown and Edge-on-Hudson. The project needs to be designed so kids (and everybody) have the option to safely bike on their own to practices, games, events and the community center. Plus the project will provide a low-stress connection between our various neighborhoods.

More importantly, these enhancements are part of a broader transformation taking shape. The new Tappan Zee Bridge will have a path for walking and biking. RiverWalk will be connected under the Tappan Zee Bridge and through Edge-on-Hudson. Studies are underway for protected bicycle lanes on Route 9 and Route 119. A grant is in the works to fix the Old Croton Aqueduct where it crosses streets. Tarrytown is redoing their Comprehensive Plan with significant focus on improving walking and cycling conditions. 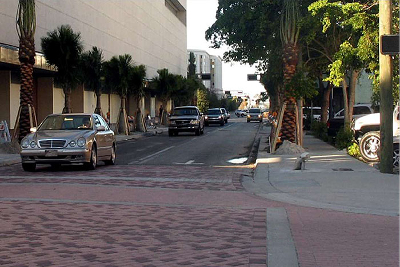 The plans in the East Parcel's Final Environmental Impact Statement (FEIS) is a good start. It has speed humps, raised crosswalks and raised intersections (see photo) on Continental Street, as well as a path connection from Devries Park.

Tweaking a few of the elements will result in a systematically safe1 network that provides everyone real transportation choices. 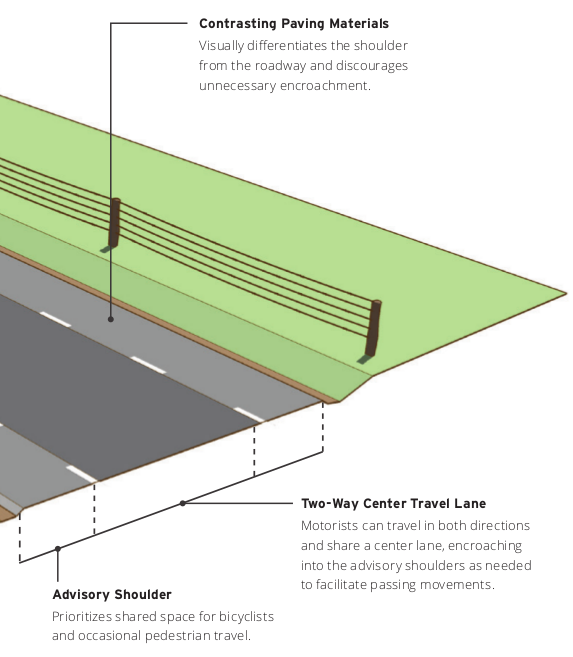 The constrained widths of the streets leading to the East Parcel make it impossible to establish standard two-way motor vehicle and bicycle lanes. Fortunately, an innovative design called "Advisory Shoulders" exists to provide safe spaces for people riding bikes and driving.2 These are a perfect fit for Continental St. (see diagram)

Once away from the homes, space is available for dedicated bicycle facilities along each street. Sleepy Hollow's Complete Streets policy calls for the incorporation of such accommodations.

Plan for Continental St. + our feedback. Click it for PDF.

The "Concept Plan" for Continental St (Exhibit III.D-3) shows 69 perpendicular parking spaces on Continental St. As anyone who drives knows, backing out of a parking spot is unnerving due to extremely poor visibility. And everyone knows, walking through a parking lot is an unpleasant experience that requires high vigilance. Thus, the proposed configuration of this parking area is unsafe for people on bikes, especially kids.

If parking is to be provided in this area, here are two ways to do this within the proposed 60' wide pavement that will be safe for everyone.

a) parallel parking with "parking protected" bike lanes. This layout has the the following on each half of the street: sidewalk, then curb, bike lane (7'), buffer zone with flexible posts (3'), parked cars (8') and travel lane (12'). This configuration meets NACTO guidelines and is widely used around the country.

Neckdowns and either raised crosswalks in all directions or a whole raised intersection are necessary.

The plans don't specify how Kendall Ave will be configured, just that it will be 24' wide. Whatever the layout is, bicycles need to be accommodated. There are several ways to make this happen, including one or more of the following strategies: protected bike lanes, advisory shoulders, traffic calming and/or a "neighborhood bikeway."3

Complete the missing segments of sidewalk at the north and south ends of the street.

"Roadway A" will run from Beekman Ave, through the former union hall property, to Continental St. The FEIS does not specify how people walking, biking and driving will be accommodated.

On the hill segment, people on foot and riding bikes should have separate facilities. It's unclear whether this location has room for a protected bicycle lane on the roadway or if the advisory shoulders should be used here as well.

Exhibit I-3 hints at on-street parking on the flat parts of Roadway A. Parking here would preclude safe, direct infrastructure for people cycling to the community center and amphitheater. Massive quantities of parking are provided elsewhere in the project, so on-street parking here is unnecessary.

People tend to drive too fast on bridges. Therefore, if the Continental St Bridge is built, it must either have bike lanes or loads of traffic calming devices. 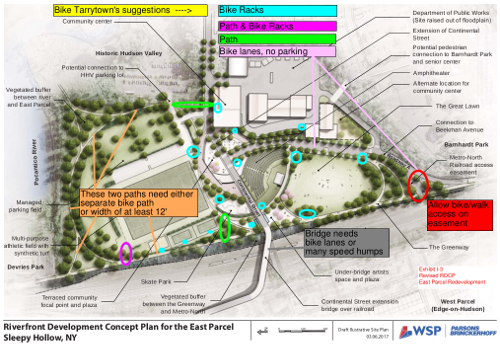 Site Plan for East Parcel + our feedback. Click it for PDF.

The main paths need to provide comfortable interactions between people walking and biking. This means either people cycling and people walking have separate paths (preferable), or if the paths are shared, they need to be at least 12' wide. This includes the Greenway (the north / south spine along railroad tracks) and the northern path (by the Pocantico River) between the Greenway and Continental St. (See orange indicators toward left in the "Site Plan for East Parcel.")

That northern path needs a spur to provide a direct connection to Continental St on the east side in the parking lot driveway. (See green circle toward top in the "Site Plan for East Parcel.")

Two short path connectors need to be added. 1) Between the Greenway and the northwest corner of multi purpose field edge. 2) Between the Greenway and the skate park. These will provide direct "desire line" routes for people coming from Devries Park, preventing people from cutting across the grass and creating muddy messes. (See green and magenta circles toward bottom in the "Site Plan for East Parcel.")

The Metro-North Railroad access easement at the south end of the property should be configured to permit bicycle and pedestrian access between the Greenway and Roadway A. This provides the shortest travel route possible. (See red circle toward right in the "Site Plan for East Parcel.")

Once people use the bike paths and lanes to get to the East Parcel, they need a place to secure their bicycles. The key locations for, and quantities of, bike parking spots needed are:

Inverted U racks. Via Bicycle Coalition of Maine.

(The "Site Plan for East Parcel" diagram shows these locations as cyan circles.)

The racks should be of the "Inverted U" variety (see image) and have 3' between each rack. Experienced cyclists consistently find this configuration is the easiest to use to full capacity. A galvanized finish must be chosen to guarantee indefinite durability.