Tarrytown Rd in White Plains is 10 lanes wide in some places. This leads to about 20 injuries from 145 crashes each year between Central Ave (the County Center) and Bronx St (the train tracks). So this short stretch accounts for 1/4 of all Route 119 crashes. And half of the these crashes happen on the one block from Battle Ave to Bronx St!

On top of that, the Hamilton Ave and Main St pair have another 222 crashes (and 25 injuries) per year. This table summarizes Route 119's crash stats.

Main St is a bit narrower and is burdened by 4 lanes of traffic. At Dr. Martin Luther King Jr. Blvd, there's a cluster of people walking injured by people in vehicles making left turns from Main St to MLK.

All of these streets are unpleasant to walk along or across due to being loud, ugly and dangerous. Plus they produce tremendous air pollution, water pollution and carbon emissions. 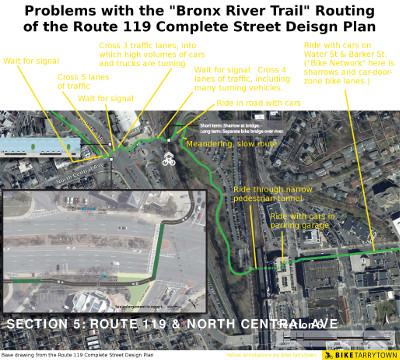 The Route 119 study's proposal in White Plains, on which we added notes about the problems it poses. Click for high resolution.

Alas, none of these problems are addressed. White Plains' administration insisted the study propose no changes to Tarrytown Rd, Main St or Hamilton Ave.

That left the study to suggest the "Bronx River Trail" routing. But this course sends people cycling on a meandering, dangerous route into White Plains that only works for brave cyclists.

The diagram (left) is an annotated map describing the route and the problems. Below is a written description of the difficulties encountered, heading eastbound, and some photos: 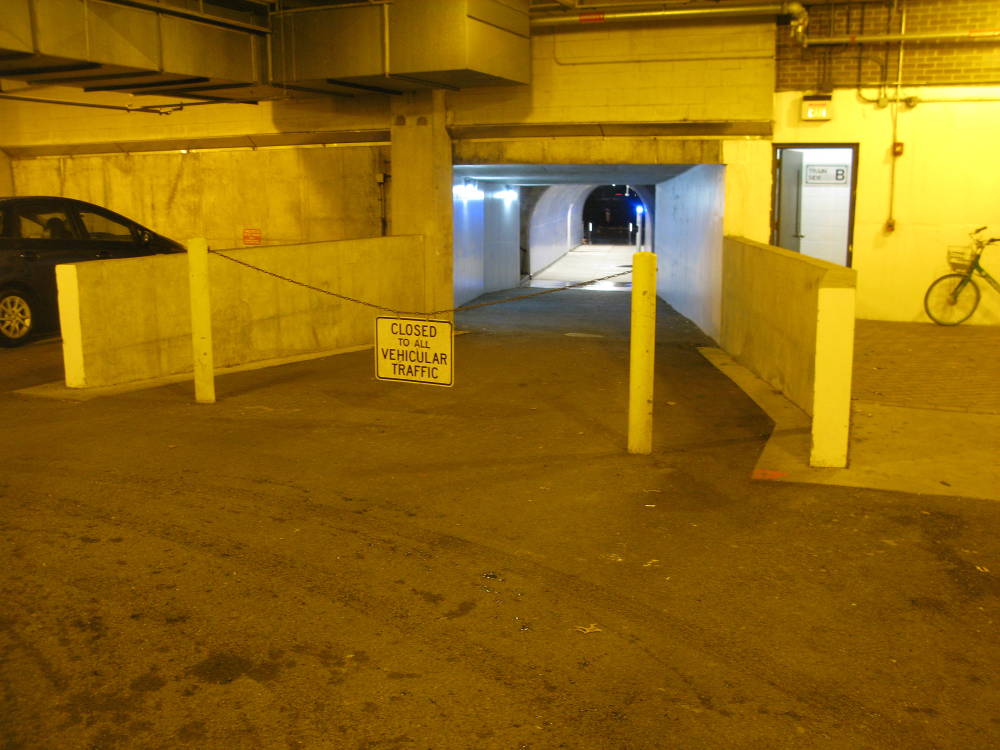 The walkway under the railroad tracks. Connects the Bronx River Trailway to the parking garage. 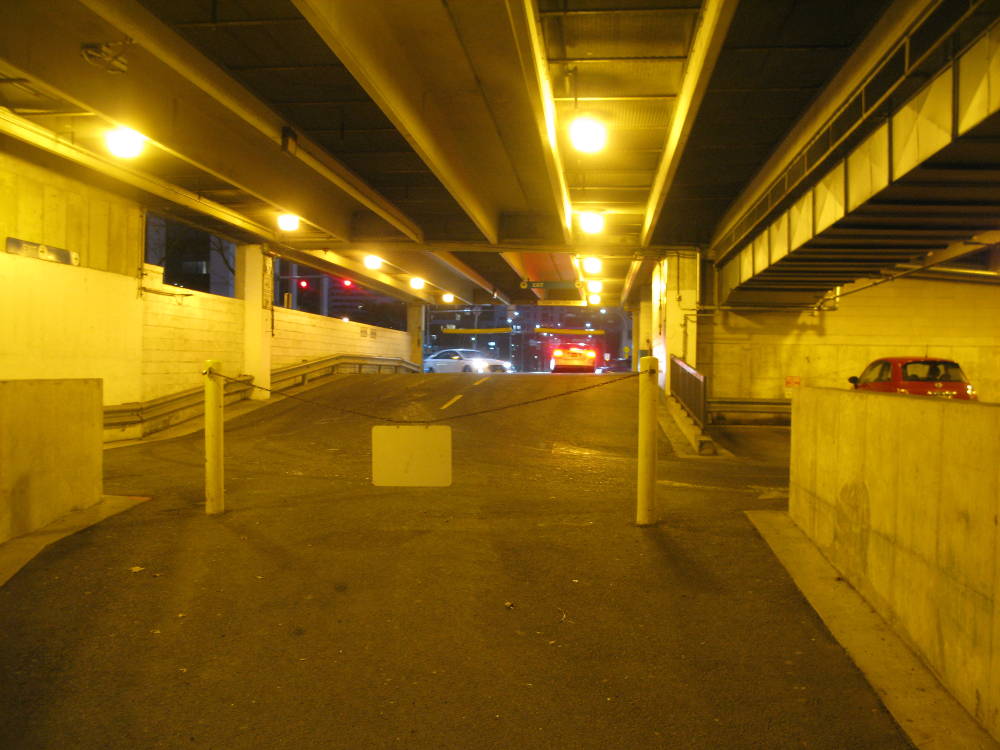 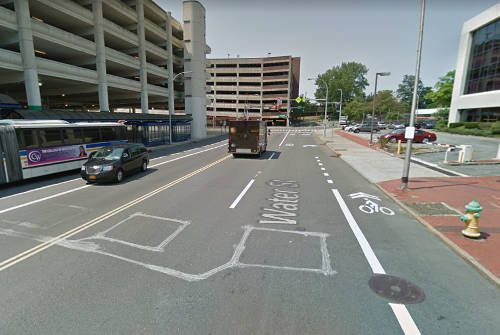 Painted bike lanes on both sides of Water St. Photo shows the eastbound lane (on left) has a car encroaching into it and a bus that just crossed it to get to the bus stop. Notice how the westbound lane (on right) ends before the intersection. In the background is the parking garage ramp that comes from the pedestrian tunnel under the railroad tracks.

And this routing misses the Battle Hill neighborhood, where 2,500 people live within ¼ mile of Route 119. 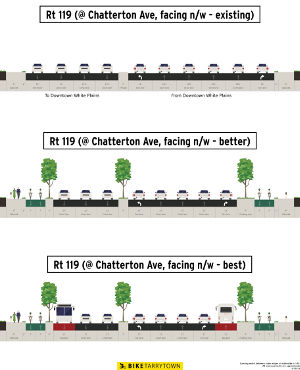 Bike Tarrytown's proposal for Tarrytown Rd in White Plains. This cross section is at Chatterton Ave, facing westbound from the "east" side of the intersection. (Note: the photo across the top of this page shows the existing conditions of this perspective.) Click for high resolution.

The traffic safety crisis, the climate emergency, the rise in obesity and asthma, and the long term livability and economic vitality of White Plains all necessitate major changes to the way streets work.

Bike Tarrytown's proposal upgrades a lane in each direction into 2-way protected bike lanes and, ideally, another lane each way into bus lanes.

Click the diagram, right, for a graphic showing our proposals.

As mentioned above, the Battle Ave / Bronx St nexus is the most dangerous spot in the study. Fortunately, there's a solution.

The southbound Bronx River Parkway has 3 entrances along this stretch. The one next to Battle Ave sees a continual flow of cars, making it precarious to walk across. And this is the walking route linking the Battle Hill neighborhood to the train station and Downtown. It is possible to dramatically improve safety for everyone (drivers, walkers and cyclists) by directing people driving to the Central Ave and Chatterton Ave entrances while closing the Battle Ave on ramp to the Parkway.

All together, this will create a safe cycling route from the heart of White Plains to the Bronx River Trailway, Greenburgh, Elmsford, the South County Trailway (now part of the Empire State Trail), the Old Croton Aqueduct trail, Tarrytown, and the Mario Cuomo Tappan Zee Bridge.

But converting car lanes to bus lanes and bike lanes will cause traffic jams!

Send this email to thank the team and request refinements