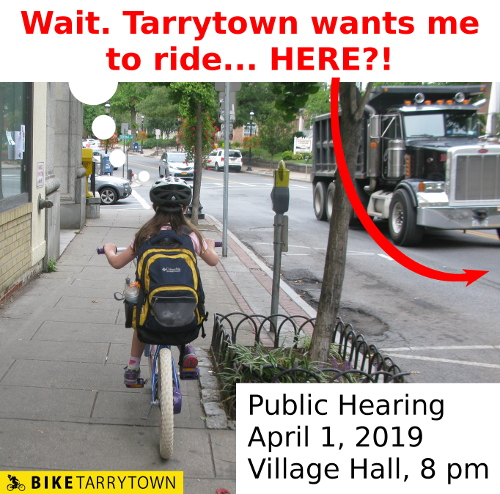 Monday is a continuation of the public hearing about banning biking on the sidewalk and making people cycling subservient to cars.

Around 10 people testified to Tarrytown's Trustees on 3/18, explaining why the proposals are a bad idea.

The whole thing is a misguided mess and must be scrapped.

Right now New York is at a crossroads regarding e-bikes. And Tarrytown is at the center of it.

Before providing those details, let me explain why this matters. Naturally, people have various takes on e-bikes.

Bike Tarrytown's position is they're important to improving transportation, particularly in our hilly region. Ebikes get people who wouldn't normally bike, who aren't athletes, out of their cars and onto bikes. Here's a video about that: https://vimeo.com/322673563

Another video with Dan is coming. He lives and works near the North County Trailway. His commute is on the long side for cycling, so he'd go one-way via bike and the other via car. Since getting an ebike, he rides both ways.

Their legal status in New York is strange. And Governor Cuomo's Executive Budget would make it worse. The budget is being finalized this week. Issues with the Governor's proposal include:

* Current law requires people driving to yield to people cycling and walking. The bill flips that for e-bikes and scooters.

Tarrytown is represented by State Senator Andrea Stewart-Cousins. She's now the head of the State Senate.

While it's likely the Governor's e-bike language will be dropped, it will be wise for us to follow through, because it:

* tell them you live in the district (only if you do, of course)

* this session, legalize pedal-assisted ebikes by making them the same as regular bicycles