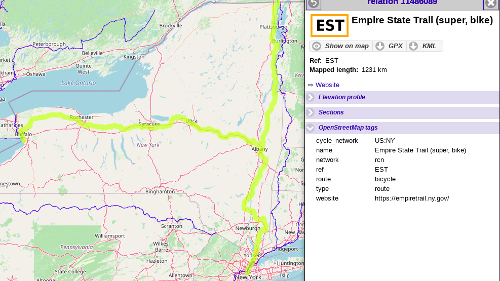 This Giving Tuesday, bask in the glow of knowing your support is making our streets safer for everyone.

In 2019, David Rockefeller's estate gave New York the land it had let the public use for many years. This September, the State released a new trail guide, in which all of the "Rockefeller Family" trails have been given names.

Where OSM was missing trails, names or had alignments out of whack, we fixed them up. Then we put them into a "relation" so it's easy to see the trail system all at once.

There are many ways to view OSM data. Waymarked Trails is a handy one because it provides an easy way to download trails to your phone.

Much of the OCA was already in OSM, but some bits were missing and on-street segments weren't mapped well. We also added information about barriers that block people who use adaptive cycles and wheelchairs.

(We plan to work with Parks staff to improve access for disabled people.)

This is really cool. Governor Cuomo proposed a statewide trail network during his 2017 State of the State address. Since then, New York has woven together several existing paths, filled in many gaps, build some new trails and improved on-road conditions to create a 750 mile network. The dedication ceremony is coming up in the next month or so.

Around these parts, the Empire State Trail uses the South County and North County Trailways. From here, you can now walk and roll to New Paltz on a paved path without motor vehicles.

(There's a short bit road riding in Brewster. Fortunately, a new bridge is being constructed to eliminate that mayhem.)

While digging through details of the route, we found various issues that need fixing. The responsible parties were contacted to address immediate issues. We also hope to produce plans for long term improvements at dangerous locations.

While mapping out the EST, we were excited to learn that the New York State Department of Transportation is constructing 2-way "cycle tracks" (aka protected bike lanes) on three state roads:

This bodes well for the Route 9 Active Transportation Plan and the Route 119 Complete Street Design Plan.

When we have a transportation question, we ask ourselves "what would the Netherlands do?" This short but sweet video about smartly programmed traffic signals brilliantly proves the point: