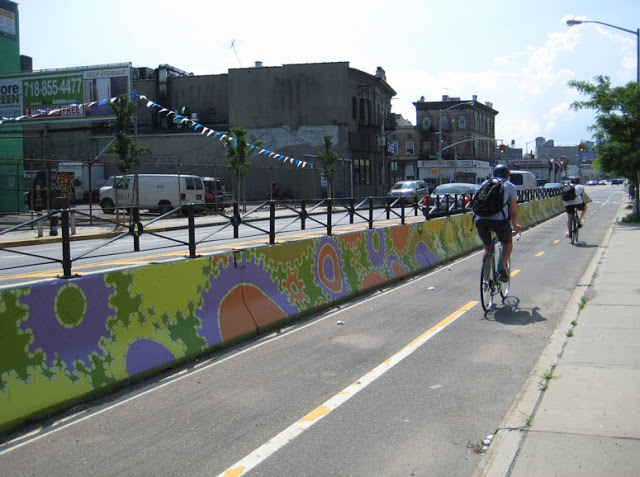 (PDF of this letter and the Thruway's reply.)

Authority staff is currently drafting the design report for the overall project referenced above. We deeply appreciate the Thruway allowing this project to extend the walking/biking Side Path from the DoubleTree driveway (across from Interchange 9's Ramps A & B) to the Old Croton Aqueduct trail [at Lyndhurst]. We are writing to help you accomplish this goal in a safer, quicker and cheaper way.

The Authority's present thinking would use the existing sidewalk area to fill this ~1,500' gap to the south. Unfortunately, this would produce a path that has only 4' of usable width, shared by people walking and biking. We guess it will cost $200,000 to construct and be ready over a year from now.

As an alternative, it is possible to implement a 2-way protected bike lane using the western curb lane of Route 9. Most of the connection can be created by putting down jersey barriers and restriping the lanes. This provides a dedicated, safe space for all types of people to ride and leaves the sidewalk for people walking. We estimate it would cost around $75,000 and be completed well before the Cuomo Bridge's path opens

Further details on both alternatives are attached to this letter.

The Thruway is implementing this connection in response to significant public response to the larger project's open house in October, 2017. Those public comments were surfaced by Bike Tarrytown. We got 15 people to the meeting and more to send emails.

On behalf of this cohort, please realize they were asking for the high quality link we're proposing. We hope you will meet their expectations.

The existing concept would convert the sidewalk area along Broadway's west side into a shared pathway. To the west of this sidewalk is a 5' high stone wall. To the east, a guard rail will need to be constructed by the curb line.

The shortcoming of this approach is there are stretches that have only 8' between the wall and the curb. Subtract from that the width of the proposed guard rail. Further subtract the FHWA specified "shy distance" of 2' each from both the wall and the guard rail. The net result is less than 4' of usable width in some locations, one of which is on a hill. FHWA indicates 10' is the desired width and 8' is the bare minimum.

Plus at least 2 utility poles and 2 fire hydrants will need to be moved, introducing sizable costs and risks of delay.

While it is possible to obtain some space by shifting the curb line, that would increase the cost and eat into the space needed for the long term solution envisioned by the Route 9 Active Transportation Conceptual Design Plan.

The Route 9 Active Transportation study has worked out how to implement a 2-way protected bike lane using the western curb lane of Route 9.

At the Montefiore driveway / Gracemere intersection of Route 9, a few linear feet of the western curb need to be shifted west to preserve the turn lanes. The sidewalk area is 13' 8'' wide and there are no catch basins, hydrants or utility poles at this spot. The cross section here could be an 11' through lane in each direction, 10' turn lanes, 2' jersey barrier, 8' 2-way bike lane. This would pull 6' from the lawn area.