Update on the Thruway's Broadway Projects 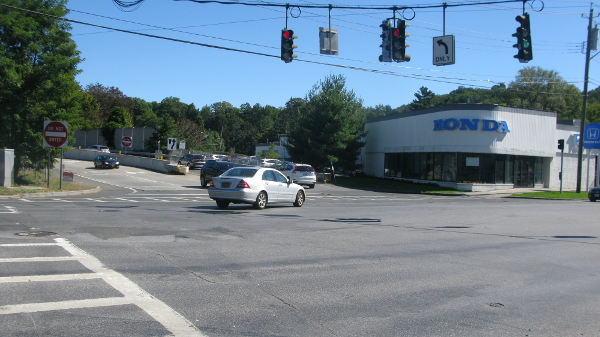 (PDF of this memo)

We wrote you on February 4 about a meeting the Thruway and State DOT were going to have on February 8. Below is an update on key outcomes of that meeting and other things we've learned since then. For each location we'll provide the update, a brief discussion of the issues, and suggest actions.

Before getting into those is the time frame for feedback and status reports on the Route 9 and Route 119 studies. We're putting them up front to avoid repetition in the various locations.

Some things you know already. Please pardon any duplication as we explain things for the record.

South of Route 119: The Thruway is hoping to finalize the design report in late May. Recommendations should be submitted as soon as possible to produce the best outcomes and least hassle for the engineers.

The Route 9 study covers Sleepy Hollow through Hastings-on-Hudson, seeking safer conditions for people walking and riding the bus, plus a safe bike network. The study's Steering Committee is composed of 3 representatives from each village. They hired Nelson\Nygaard to perform the work.

Tarrytown's contingent to the Steering Committee studied public input and the consultant's research. They synthesized it into recommendations Nelson\Nygaard will use to draft plans. They suggested:

Nelson\Nygaard is striving to produce drawings for the Tarrytown area in the next week or so. They'll forward the drawings to the Steering Committee, who can then submit them to the Thruway Authority.

The Route 119 study is working toward pedestrian, bus and bicycle improvements along Route 119 from Broadway in Tarrytown to Broadway in White Plains. The Steering Committee for the study is composed of 3 people from each municipality. Nelson\Nygaard is also the consultant for this study too.

In terms of this memo, the study will figure out how to tie people cycling on Route 119 into the:

The consultants produced alternatives, preliminary drawings should be available shortly. Costs and pros/cons are being researched. Public presentations and discussions of will happen in April.

Update: The ramp by 303 South Broadway from southbound Broadway to the TZB will reopen. DOT & Thruway are OK with it being realigned and narrowed at the Side Path crossing to make things safer.

Issues: The ramp's old configuration was wide and angled for high speed driving. The realignment is good news for the throngs of people that will be walking and biking to/from the new TZB's Shared Use Path, as well as for the residents and visitors traversing the Side Path because it's a segment on the bike network envisioned by the Route 9 Active Transportation study.

To Do: Monitor the design process to ensure the proposed changes are the best possible.

Similarly, DOT and Thruway are OK with realigning and narrowing the entrance to the Route 119 jug at southbound Broadway in order to improve safety of the Side Path crossing.

Update: The Thruway's engineer said keeping sidewalks and paths at their level when intersecting with driveways "will be our approach provided drainage, grading and property lines don't become an issue."

To Do: Monitor the design process to ensure the proposed changes are the best possible.

Update: DOT wants to maintain two southbound through lanes for motor vehicles between Paulding Ave and the DoubleTree driveway. Thruway staff will research options to provide a wider Side Path by the DoubleTree's decorative sign wall. Options include going behind the sign.

Issues: Initial plans significantly narrow the Side Path as it approached the DoubleTree's driveway due to the hotel's sign being on a decorative wall which the State would rather not pay to move. Traffic modeling by the Thruway found one southbound motor vehicle lane was generally sufficient, which would simplify providing adequate Side Path width.

To Do: Monitor progress, provide assistance as needed.

Path Extension to the OCA

Update: DOT is open to creating a connection from the DoubleTree driveway to the OCA at Lyndhurst. They'll consider improving the sidewalk and/or an on-street two-way bike lane. The DOT is wary of having a guard rail they'd have to maintain, so are hesitant about the sidewalk option. The Thruway is researching options on the guard rail. They're also looking forward to seeing Nelson\Nygaard's plans for this segment on behalf of the Route 9 Active Transportation study.

Issues: Using the existing sidewalk area as a shared facility for people walking and biking is untenable. Several stretches have 8' between the curb and wall, with a spot that's 7'. Subtract from that the width consumed telephone poles, a potential guard rail and "shy distances" next to the wall and rail.

An on-street 2-way protected bike lane along the west side of Broadway is being proposed in this segment by the Route 9 Active Transportation plan.

To Do: The Village's support for the on-street bike lane here should be expressed directly to Thruway and DOT decision makers and state legislators. Ensure prompt delivery and review of Nelson\Nygaard's drawings, then meet with the Thruway about them. Monitor progress and offer assistance as needed. 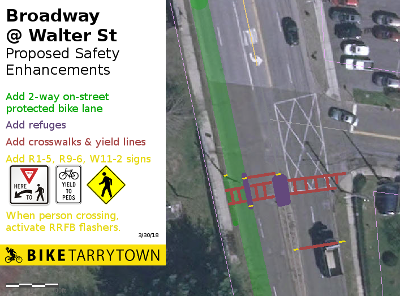 The street here is ~55' wide, curb to curb. Assuming three 11' motor vehicle lanes and 10' for a 2-way protected bicycle lane, there can be 12' worth of refuges. If slightly more width is required, the bike lane could make small adjustments to it's width and/or a short length of the western curb line. It'd be even better to push back on the DOT's lane allocation. The safety benefits of one lane northbound outweigh having an extra 100' of a second lane.

To Do: The Village should request this improvement. Monitor progress and offer assistance as needed.

Refuge Between Ramps A & B 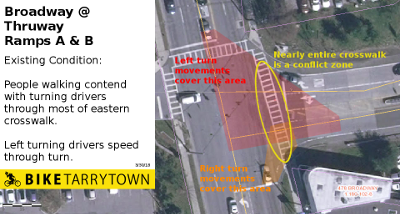 Update: State DOT staff object to a pedestrian refuge between the Thruway exit/entrance ramps at the Honda Dealership. The sole "safety" measure planned is setting walk signal times based on crosswalk length and how fast an average person walks.

Issues: Such reliance on distance based timing alone is unsafe. Research by New York City DOT found people making left turns in their cars are particularly dangerous to people walking: 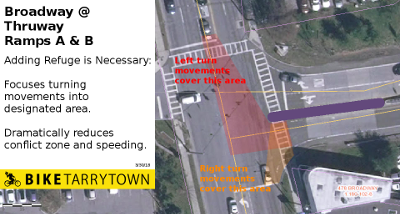 The unpleasantness of the existing crossing limits walking from the Pennybridge neighborhood. The Thruway's turn lane project widens the crossing, exacerbating the isolation.

To Do: Apply political pressure on State DOT to ensure a median refuge gets built.

Issues: Guard rails next to the street are needed to make the Side Path wide enough from the DoubleTree sign to Route 119. Current plans have the path being 10' wide. This path will likely see thousands of users per day and is on a hill. Per FHWA guidelines, the path needs to be 12 - 14' wide. (p 4-5, Small Town and Rural Multimodal Networks, FHWA, 2016)

To Do: The DOT must be pushed to overcome their reluctance about guard rails and the Thruway required to widen the side path.

To Do: Meet with Thruway staff to examine their current plans. Encourage the Thruway to provide sufficient width and separate paths.

Update: None since our February 4 email to you.

Issues: George Paschalis mentioned the SUP crosswalk will be at the existing signal at the north end of the jug handle. He also said this decision was made at the March 3, 2017 meeting in Village Hall (attended by himself, Mike Blau, George Santana, Pete Harkham, Daniel Convissor and David Aukland).

Here's how the meeting actually transpired. Thruway staff showed plan views of two crosswalk options. Both proposals were unsignalized crossings on the north side of the SUP terminus driveway:

The Bridge folks mentioned the DOT contemplating a third concept, crossing at the shopping center driveway. No decisions were made at the meeting. Thruway folks said they'd be in touch.

At the meeting, David Aukland and Daniel Convissor indicated a preference for having the crossing at the SUP terminus, for there to be one travel lane in each direction with a refuge island in the middle (similar to Option 1). They also noted designs here would need to be made in collaboration with the Route 9 Active Transportation study. The crosswalk proposals were forwarded to Nelson\Nygaard, which had some follow up discussions with the Thruway.

Making the main crossing at the jug handle is problematic:

The Route 9 Active Transportation consultants will provide plans for a safe crossing at the terminus and the 2-way on-street bike lane north of here.

Northbound Broadway currently transitions to one lane at this point. Southbound Broadway presently changes from one to two lanes 400' north of here. Thus, having one moving lane in each direction at this crosswalk isn't a hardship.

To Do: Ensure prompt delivery and review of Nelson\Nygaard's drawings, then meet with the Thruway about them.

Connection from SUP to Street

Issues: There needs to be a safe, low-stress, legal way for timid cyclists to ride from the SUP to the Side Path or Broadway bike lane. People who don't feel confident cycling amongst cars shouldn't have to ride through the parking lot or driveway. Nor should they have to ride through people enjoying the plaza.

To Do: Sit down with Thruway to examine current plans and ensure they're good.