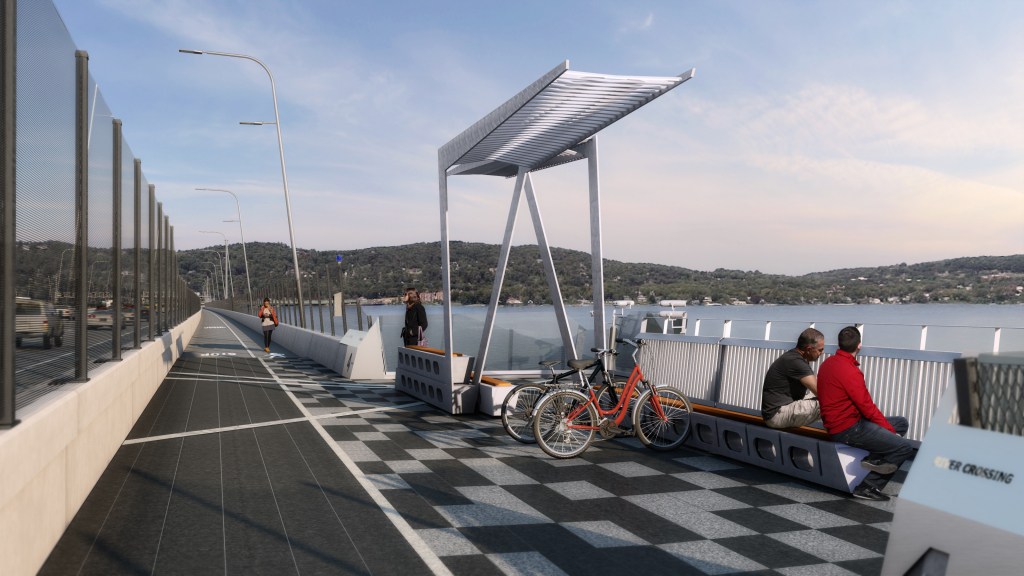 The designs for the new Tappan Zee Bridge's Spur Path / Side Path in South Nyack dated late March 2017 just came across my desk from a friend. Overall it looks good. There are a few problems that need to be addressed, please.

It's reasonable to have rumble strips leading up to, and the granite pavers at, the point where the Esposito Trail crosses the Spur Path. Assuming they're ADA compatible, of course.

Requiring people riding bikes to dismount is unreasonable. Because it's unreasonable, very few people will do it, setting up general disregard for the law. And it creates an opportunity for discriminatory enforcement. The appropriate treatment are signs requiring people biking to yield to people walking.

How are the spring loaded gates at the terminus going to be used? From the signs on them, it looks like they might normally be in the closed position. If that's the case, that's inappropriate.

A tremendous number of people that will be walking, cycling at the corner of Clinton Ave and Franklin St. Thus, people driving should push their cars through the intersection. Just kidding. A raised intersection treatment should be used, including special coloring of the Esposito Trail crossing.

The curve radius of the curb at the southeast corner of Clinton and Franklin is way too large. People in vehicles will be able to move too fast when making right turns from northbound Franklin to eastbound Clinton.

Similarly with the curb at the northeast corner for those driving from westbound Clinton to northbound Franklin.

I see "bicyclists share the roadway" signs are being planned. Since the streets near the terminus are narrow, it's necessary to install "bikes may use full lane" (MUTCD R4-11) signs along area streets.

Please forward us the signalization plans for the Clinton / Franklin intersection, including locations, phasing and timing.