When the cycling / walking path on the new Governor Mario M. Cuomo Tappan Zee Bridge opens on June 15, 2020, it will be an important link in the local, regional and national active transportation networks. We anticipate 5,000 people will bike across the bridge on peak days. Many people will walk and run on the bridge as well.

Insufficient thought has been given to safety on Route 9 around the Tarrytown end of "Shared Use Path" (SUP).

This document analyzes existing and expected travel patterns and infrastructure on that block of Broadway, along with a review of the State's actions in the area. The conclusion is there are several significant transportation safety risks that the State has refused to address thusfar. Fortunately, simple, quick fixes are available.

There are three main safety issues:

As a result, multiple Tarrytown residents have complained to us that the hostile infrastructure here isolates them. They don't feel safe walking to and from the Pennybridge and Van Wart neighborhoods, as well as the JCC.

Crossing by the Terminus

The Tarrytown terminus of the SUP is immediately south of the office building at 303 South Broadway. The photo below shows where the bridge path meets Route 9 in Tarrytown. 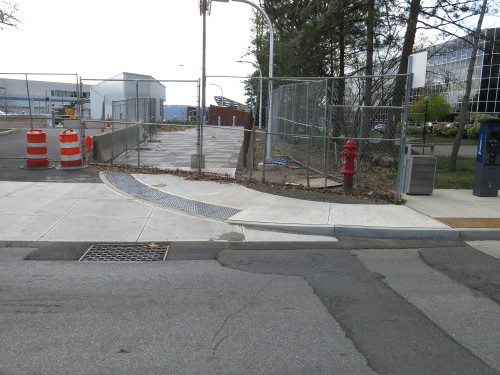 There are many reasons people walk across Route 9 in this area. The east side of Broadway has a shopping center, a bus stop, and nearly 400 people in apartments. On the west side are two bus stops, an office building, The Quay townhouses, plus the Shared Use Path. (Diagram, below.) 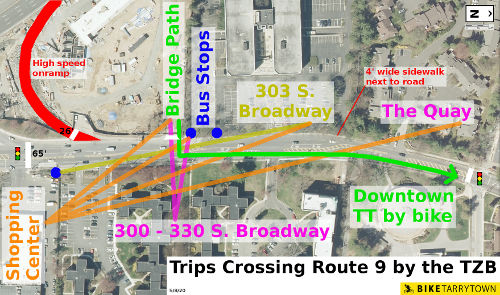 Walking Conditions on West Side

People walking north on the west side of Broadway from the SUP terminus face a dangerous 760 foot journey to reach the first crosswalk at Prospect Ave. The initial sidewalk segment is 5' wide, next to speeding cars and trucks. (Photo, below.) 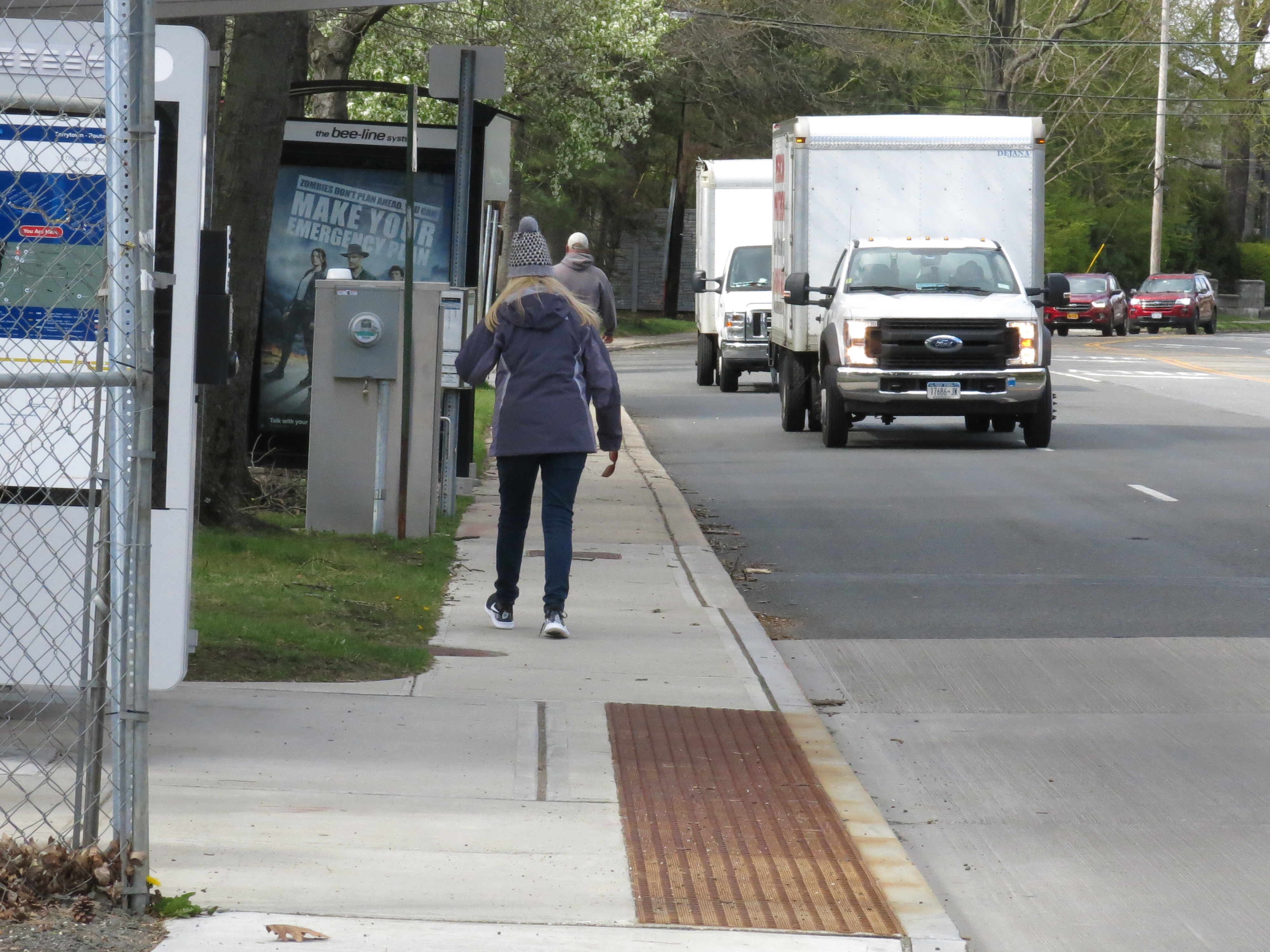 Then people need to cross the 70' wide driveway of 303 South Broadway. It's engineered for quick driving, with no protective measures for people walking. (Photo, below.) 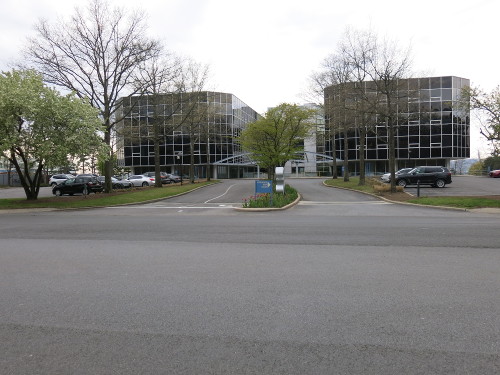 The next section of sidewalk is a measly 4' wide, in bad condition, and is directly adjacent to swiftly moving vehicles. (Photo, below.) (Note: the Village of Tarrytown was notified of this sunken sidewalk in April, 2019.) 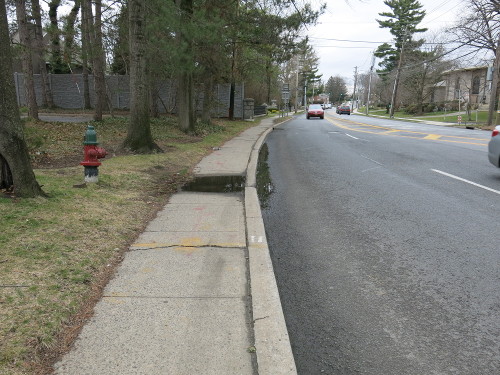 To the south on the west side of Broadway people have to go 380 feet to the nearest crosswalk. The first obstacle is crossing the Thruway's maintenance facility driveway. The curbs are curved wide, allowing quick turns by people driving. 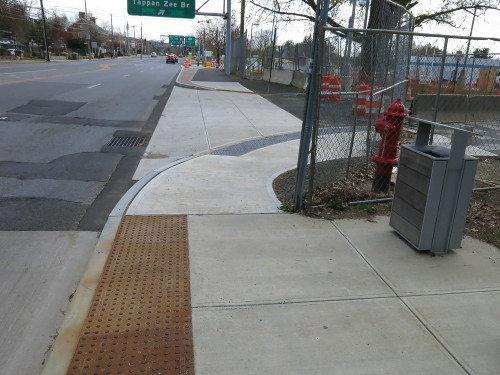 The walkway is a 10' wide path shared with people cycling. During peak times, the path will be heavily used. (Photo, below.) 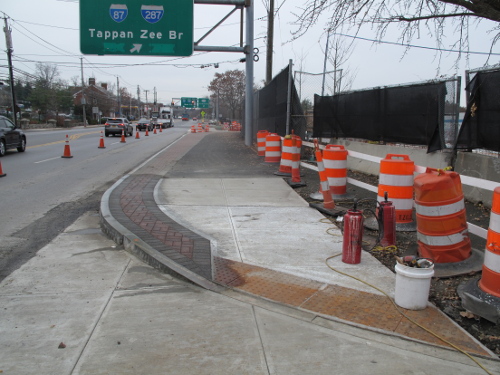 Then there's crossing the 26' wide ramp that will take cars at speed from Route 9 to the Thruway. (Photo, below.) 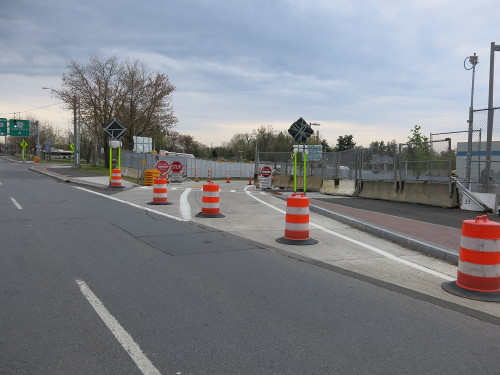 Finally, upon reaching the new crosswalk of Route 9 at the shopping center's driveway, people face waits up to 95 seconds for the walk signal. (Per FHWA, wait times over 60 seconds are considered Level of Service F for pedestrians.) Then they have to cross the highway, which is about 65' wide there. Such widths pose problems for people who walk slowly (children, disabled, elderly) (Photo, below.) 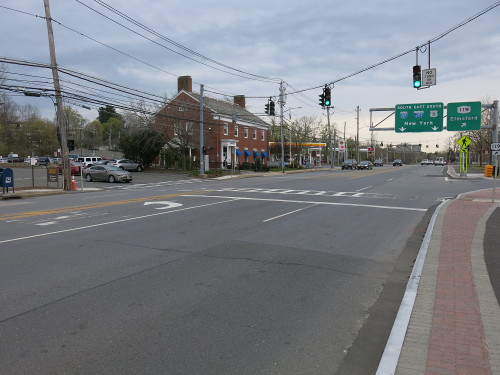 Walking Conditions on East Side

Given the existing crosswalks are out of the way and getting to them is unpleasant and unsafe, as well as unsafe to use, people already cross Route 9 in the vicinity of the SUP terminus. (Photo, below.) 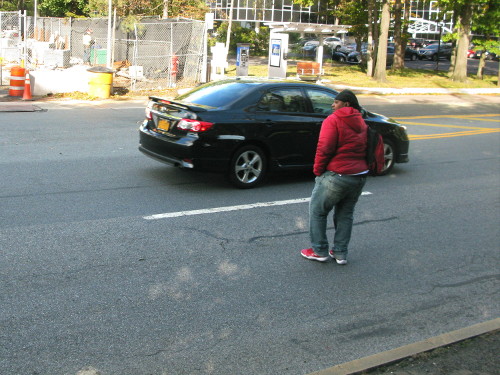 Folks riding from Rockland who want to head north (to downtown Tarrytown, Sleepy Hollow, etc) have two primary options when they reach Route 9: a) ride on the narrow sidewalk to Prospect Ave, then use the signal there to cross Route 9, or b) cross Route 9 at the SUP terminus, which at that spot is a 5 lane highway.

The photo, below, shows the traffic conditions at this location, as viewed from the north. The red line indicates the route people choosing to bike on the road will use. Notice the 4 lanes of heavy motor vehicle traffic. 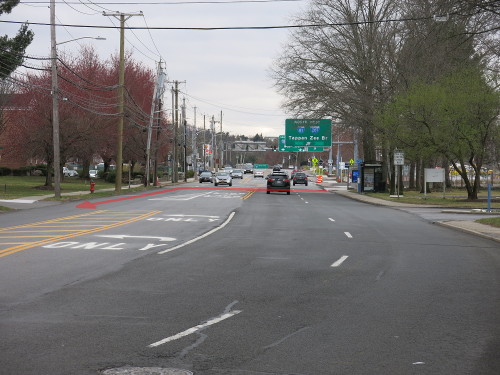 The New York State Thruway Authority and the New York State Department of Transportation contemplated three crosswalk options for the area. Proposal 1 was pretty good. (Drawing, below.) During a March 3, 2017 meeting with Thruway staff, Tarrytown's liaison to the bridge project and our Director endorsed it in principle and made some suggested refinements.

Later, the State's engineers felt they didn't want to slow down people driving. So they had the crosswalk built at the existing traffic signal for the shopping center's driveway. As far as we know, the Thruway did not circle back with the Village's liaison about this change. While the construction made the curve into the jug handle a bit less wide, it was far from enough to make the location safer. (Diagram, below.)

Making a Safe Crossing is Easy

Fortunately, creating a safe crosswalk at the terminus is easy. Our proposal (drawing below) is based on the Thruway Authority's first proposal. The plan applies countermeasures specified for this location's conditions by NYSDOT's Pedestrian Safety Action Plan. (See pages 50 and 59: Uncontrolled Location, Treatment Package B, including the Enhanced Treatments.)

Rendering of the safe crossing design as seen from the north. 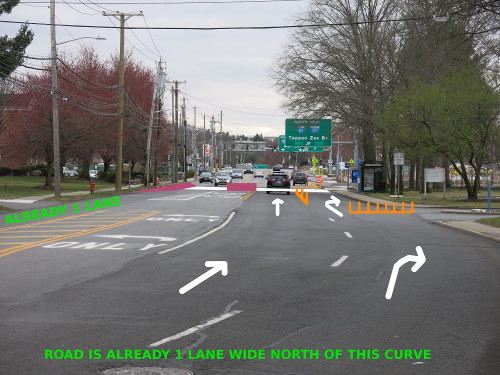 Rendering of the safe crossing design as seen while facing east. 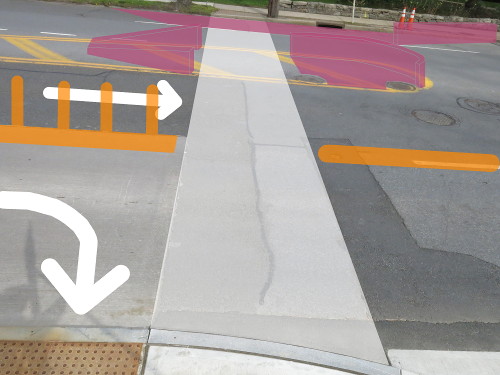 Below is an example of raised lane separators look like. 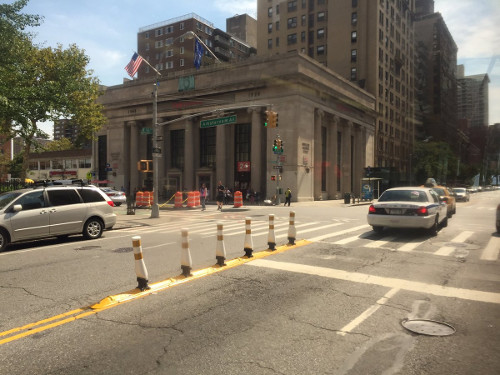 Note: engineers designing the pedestrian island can either work around the utility holes or raise them. The curb extension on the east side of the road can have channels to accommodate drainage to the catch basin, over which bridge plates can be added.

Below are some additional pictures to provide further context.

This is what people cycling from Rockland will see upon reaching Route 9. View is facing east. 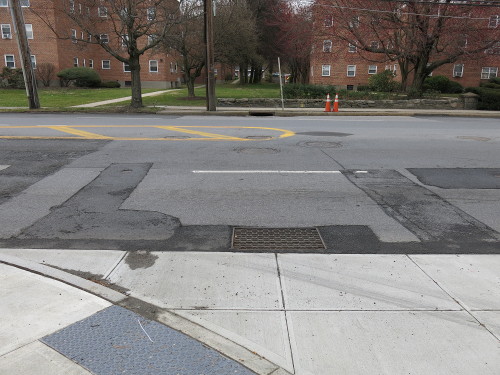 The view to the south from the terminus. 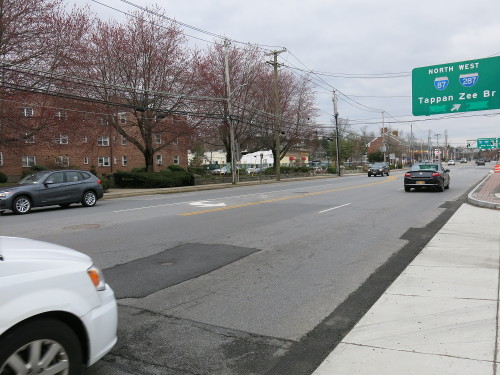 Looking at the terminus from the south. 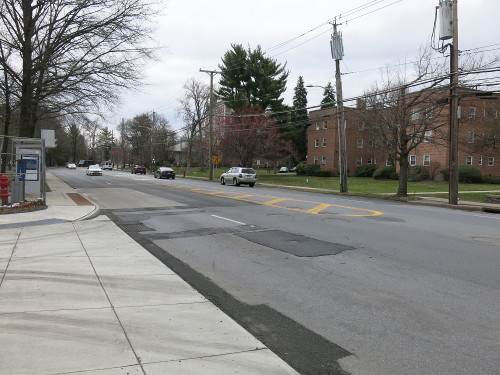 Looking at the terminus from across Route 9. Facing west. 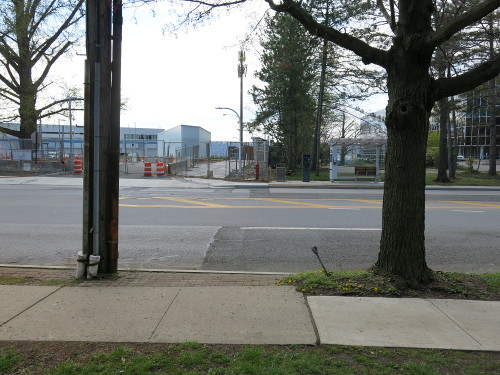 Crossing the On Ramp

The simplest and safest solution is to allow only buses and emergency vehicles to use this ramp.

Another option to quickly improve safety is using raised lane separators and/or jersey barriers to tighten the curve and reduce the crosswalk length. (See "Bike Tarrytown's proposal" diagram, above.)

Long term, a raised crosswalk should be constructed across a narrowed roadbed. This ensures people drive carefully through the crosswalk because they have to come up to the level where people are walking and cycling. (Example photo, below, from Old Redwood Hwy @ US 101, Windsor, CA. Credit: Coastland Civil) 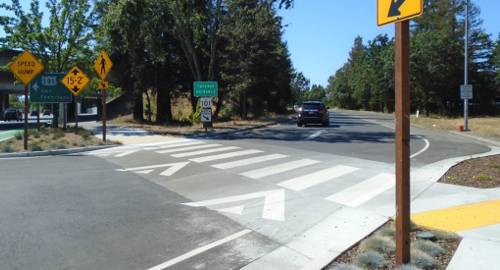 The final danger is crossing the entrance of the jug handle to Route 119. The pedestrian signal timing has people waiting up to 95 seconds to receive a walk signal. This engineering decision guarantees people walking will not comply with the signal. (FHWA)

The crosswalk is 24' long and the roadway has two lanes — meaning people can drive around a car stopped for people in the crosswalk. (Photo, below.) 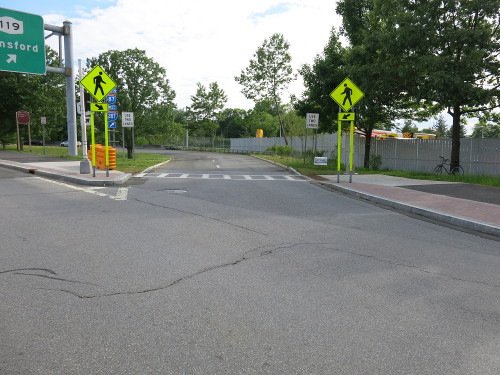 The angles and size of the curve from Route 9 into the jug handle means people drive fast here. We observed people driving up to 30 MPH through the crosswalk. Such speeds are deadly for people outside motor vehicles. (Photo, below.) 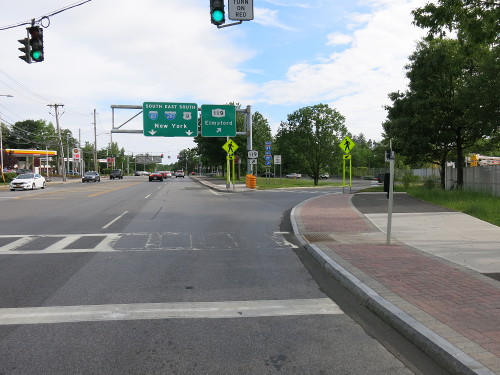 The immediate remediation is removing the walk signal and making the jug handle entrance one lane wide. This can be done quickly with a row of raised lane separators and/or jersey barriers. Long term, a raised crosswalk should be built across a narrowed roadway. (Below is a photo the one lane configuration working well during construction.) (See also: "Bike Tarrytown's proposal" diagram, above.) 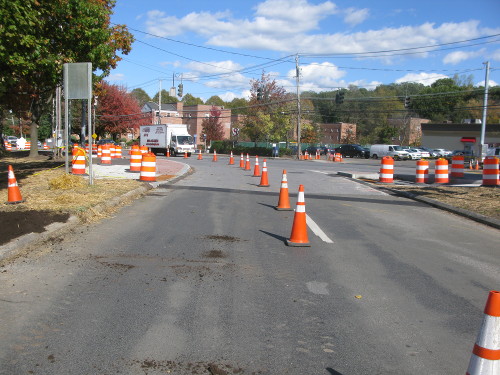